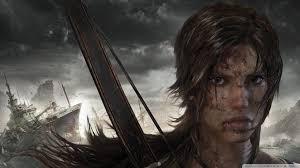 So, reboots. Those are pretty cool, you know, when a company decides to bring back something old but with a fresh new young (other synonyms) take on the franchise. Like with The Amazing Spider Man. (Gwen Stacey was pretty amazing, you know what I’m saying?) or Total Recall, pretty much every movie that came out last year was a reboot (sadly they did not reboot the show Reboot.) And now the reboot craze has hit them newfangled virtual TV boxes with their high tech move-yo-body devices that them whippersnappers seem to adore so much. Back in my day we had to jump on goombas heads with our own two feet. The latest rebooted boot that was leased and released was Tomb Raider. Man, remember Tomb Raider. Those were some good movies. Games. They were games first. I lied. But hey, Angelina Jolie. She’s pretty cool, I guess.

But alas. She has decayed away and is nowhere to be found in this [INSERT CLEVER NAME FOR VIDEO GAME:// ERROR:// NO CLEVER NAME FOUND] but I don’t think anyone really missed her, cause Lara Croft is brand spanking new and gets herself into a lot of trouble… because that’s how this game goes.

The main character of Tomb Raider is Lara Croft, you remember her, she’s [GOOD QUALITIES NOT FOUND] but this time Lara ain’t no actual Tomb Raider, she’s just an aspiring archeologist who got stranded on a desert island. Sadly Gilligan isn’t anywhere to be found, only pain. And some crazy people. Because Island Madness. In the beginning, Lara set out to find some Japanese island with a bunch of people who may or may not be completely retarded. On her way to the island, the ship capsizes and gets torn apart because of some crazy storm that’s explained later in the story. Then Lara arrives on the island. It doesn’t take a genius to realize that this island is in fact the island they were headed to. Lara wakes up on the beach, Lara gets up and starts calling her friends, but sadly is not heard and is instead punched in the back of the head by some crazy dude. Then she gets killed. The end. Actually she just gets hung up to the roof of a cave in some kind of bag surrounded by dead bodies. Being the certified arson-ologist Lara is, she starts swinging to bump the other bodies into the nearby candles. Unfortunately she ends up igniting a wooden support beam close enough to her to allow her to set her own suspended sleeping bag on fire. Which lets her fall a good twenty feet onto a conveniently placed stake that wastes no time making Lara’s waist its new home. (eeegh.) Then Lara tears it out. But not from the way it came in. No, that would be convenient. No, she helps the piece of wood complete its life long journey. (eeegh, yeouch.) Lara wastes no time leaving the room she was in, falling down a couple times and burning half a dozen barrels before she gets out. Once out, Lara realizes what she must do. She must dance. Or find her friends. On her way to find her friends she runs into one of her friends and some old guy with a cane named “Mathias” He’s totally unimportant and you definitely don’t see him again. Lara allows herself a couple moments to pass out and by the time she wakes up, her friend and Mathias totally left her with the bill. Lara tries to find them but sadly… walks into a freaking bear trap. (eegh, yeouch, owwie.) then wolves attack her. The End.

Hey, that could actually be the end of the game. I read a book that ended with the main character getting attacked by wolves, I also saw a movie with the same ending. (Although it was the movie based off the book…) That’s not the end of the game, but you would have had to take my word.

The gameplay is pretty standard. I’ve never played Uncharted but I can assume that the games both play very similarly. In Tomb Raider there are climbing aspects and shooting aspects and quick time aspects that no one likes and whatever aspects. The gun shooting parts are what I’m not the biggest fan of. Shooting itself is done fairly well. Movement is smooth and getting in and out of cover is *cough* eh, not so good *cough* But the problem is that these enemies take way too many bullets to take down. It can literally take over five bullets to take one enemy down, barring headshots. Which are hard to pull off, either because I suck or because I suck. But unless these crazies are wearing adamantium jackets, I should be able to kill them fairly easy. I guess it’s to balance it out. Lara herself can take a literal butt-tonne of bullets before dropping. (Yes, I mean a literal butt-tonne. Literally.)

You know what’s cool about this game? Lara. She kind of starts off as the average girl who is kind of a pansy but does what she needs to do to survive. Think of her as Samus from Other M only not so annoying I want to commit a murder-suicide. Lara actually becomes something else, she develops into a strong young lady and I would totally give her my number. But Samus can leave.

There’s also multiplayer, which is eeeeeehhhhhh no so good… And we’ll leave it at that.

Tomb Raider gets a eegh out of yeouch.