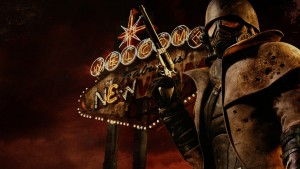 What can I get for ya, smoothskin?

You feelin’ that Fallout 4 hype? This guy is. So I’m gonna review Fallout: New Vegas this week. Cause I’ve been playing it to either get myself less or more excited. I don’t know which I’d prefer at this point.

So if you’re not familiar about Fallout it’s a post-apocalyptic retro-futuristic alternate history branching universe set in Nevada.

Here’s a better one with more words.

In the Fallout universe society never really advanced past the 1950s aesthetics but is somehow more technologically advanced than our current world, as in they all wear poodle dresses and also have laser guns. But like also America went to war with China and it ended with literally everyone throwing nukes at everyone else and now the world is a desolate wasteland. And I don’t really understand why it needs to have the retro-futuristic aspect. I’m not denying it’s cool but it kinda gets muddled in all of the, ya know, bareness of barren wastelands. It just feels to me like there are two different design philosophies that sometimes work together and sometimes fight each other for my affection. I’d rather walk through a colorful house with a cool fridge than a tin shanty with a bunch of limbs hanging everywhere. What I’m trying to say is, I want to stay in this wasteland but sometimes I also want to work at a Nuka-Cola bottling plant.

It doesn’t help that this game is set in Sin City. I’ve always wanted to go there for no reason.

There is a story. It takes a back seat to a lot of your endeavors. It’s a Bethesda game, 90% of your time will be spent actively avoiding the main campaign.

But here is a summary of the story because you asked so nice.

Would it kill you to ask?

I give and I give but I get nothing in return.

You play as a Courier that’s like couriering stuff all over the Mojave Desert when a couple jackalopes show up and shoot you straight in the face. That’s literally before you start playing the game, so don’t call me out on spoilers. Then you customize your character because apparently the bullet murdered your face more than anything and you get set on your way to find the man that tried to kill you and find out why the dang heck he was even trying to. But that can wait, you have zombies to send to space!

That’s actually a sidequest. It’s really annoying. You need to run in and out of a building a dozen times because you can’t fast travel while indoors. That sucks.

Now I usually talk about the gameplay.

It aight. I wouldn’t write home about how great the game feels to play but I will say it’s addicting enough to keep you playing for hours upon hours. But that could just be the environment (Which I already talked about.)

I guess I could mention V.A.T.S, which is a button you can press while fighting enemies to target a specific enemy and body part. It’s pretty cool and was originally the only way to fight in the first two which were top down clicky-movey games like Diablo or something. But in 3 and New Vegas it feels more like a way to supplement the less than stellar shooting mechanics. Aiming feels stiff and it’s pretty hard to tell if you’re actually hitting something unless you see it’s health bar dropping. (This is why Call of Duty has hit-markers. They work)

So yeah. The combat isn’t the biggest appeal. The game is mostly reliant on the world building and immersion. Unfortunately the latter is ripped away from your grasp like a screaming child is by a zombie every time a group of bandits shows up.

Sometimes, if it really stands out to me, I like to talk about the soundtrack.

It aight. It’s a collection of songs that were either from the 50’s or sound like they were from the 50’s. But Fallout 3’s soundtrack was much better. Like waaaaaaaaaay better. New Vegas’ soundtrack is low-level basic garbage, comparatively.

It’s got the immersive world going for it and that’s almost it. Ya know, when you boil Fallout New Vegas down to exactly what’s good about it and exactly what’s poop about it, it sounds lackluster at best. But it has something going for it that just keeps me playing and keeps me hyped for Fallout 4. Maybe the shooting will be good, maybeeeeeeeeee?

(EDIT: The gameplay reveal showed hit-markers and actual crosshairs. It has already won my affection.)

On a scale from wasteland to wastEDland. Fallout: New Vegas gets a… like… a ten…?