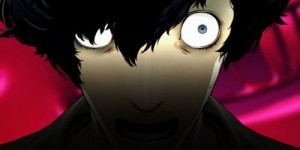 Alright I got it.

Here’s the best sales-pitch I can give for Catherine. It’s a puzzle game wherein you play as a man that is cheating on his girlfriend Katherine with a girl named Catherine. You’re rightly confused. I think it was deliberately confusing.

Yeah… so the story.

You play as Vincent Brooks, he is a man voiced by Troy Baker (But who isn’t these days?) Mr Baker is in a relationship with Katherine McBride. I realize now that last name is the least subtle thing ever. Katherine is pressuring Vincent into marriage. Vincent doesn’t get down like that and eventually a real cute thang wanders into his life. Her name is Catherine. Upon meeting Catherine and presumably making the noises of the night with her, Vincent is thrust into some kind of nightmare where he must push and pull blocks to reach the top of a tower. The only way he can wake up is to reach the end of the section each night. If he fails, he dies.
That’s your job though.

The game is split up into three sections, there are the aforementioned nightmares. Which are the meat of the game, you basically just solve puzzles. The second big event that takes place every day are the bar events, where you walk around a bar and talk to your friends and two really creepy old ladies and you also need to get sufficiently drunk for the nightmare, because the drunker you are, the quicker you move. The last section is just cutscenes. The cutscenes take place during the day and don’t require any player input. You just gotta sit there, loser. They’re meant as a way to flesh out the world and provide some character development.

There’s also some kind of moral system. You can pick options during the actual gameplay bits that will either push Vincent towards Katherine or Catherine. By picking a certain option you can alter the daytime cutscene parts in minor ways. You can tell when the moral system shows up because Vincent’s eyes roll back into his skull and he becomes a black man as far down as his forehead.

That description made no sense.

Here’s what I love about the game.

It’s composed by Shoji Meguro and I want to raise his children. The soundtrack is a mix of modern hip-hop (which I usually don’t like but Shoji is just such a talent) during the bar sequences and classical pieces remixed with guitar riffs and slick drum beats during the nightmares. There’s a lot of style in the soundtrack and you can’t even deny that. (He also did all the music for Persona 4, which I reviewed earlier in the planet’s cycle.)

Nothing comes to mind… Game’s not perfect but I can’t think of any examples of what’s wrong with it.

In summation (that’s a big word.) Catherine is just a cool game with an enjoyable gameplay element and a pretty intriguing storyline. All tied together in a nice girly looking package. (game case is pink. Try explaining that to your friends.) And it’s topped off by a soundtrack composed by the greatest composer on earth…

On a scale from Katherine to Catherine. Catherine gets a Katherine.