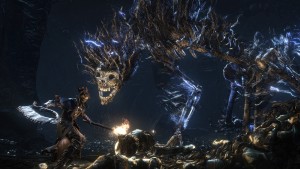 Hey. ‘member when I did reviews? Yeah, I’m bringing it back. WIF SUM BLUDBORN M8!

So, if you don’t know what Bloodborne is, let me lay it down f’real up in here. It’s basically about a werewolf hunter getting stuck in a ye olde deathtrap city on the “night of the hunt” I don’t know what that means exactly but there’s probably some lore for it somewhere. Since the story isn’t directly told to you, I’ve had to decipher the story by myself through bits and pieces of extremely vague character dialogue and item descriptions.

The game feel is pretty solid, usually the controls don’t lead to your untimely demise. All the buttons do what they should do when they should be doing it. But the controls are really convoluted and unnecessarily complex. R1 for light attacks? Okay. Hold R2 for heavy attacks? What happens when I just tap it? An absolutely useless heavy attack? Fair enough. L2 to shoot your gun, and shooting your gun isn’t even a ranged attack but rather a really dangerous way to interrupt enemies in the middle of their attacks allowing you to stick your hand inside them and deal massive amounts of damage? I’m with ya so far. But what does L1 do? Lolwut?

My sword is a hammer now.

Yeah. The big gimmick in Bloodborne are “trick weapons.” By pressing L1 with any weapon you’ll transform it into a (maybe) different and (arguably) better weapon. My favorite was the sword that turned into a slightly larger sword. There are a couple more creative weapons like a metal club that becomes electrified or a pretty crappy rapier that shoots bullets. (But I already have a gun) but in the end it just boils down to having a decent enough single handed weapon for the majority of the game and two handed weapon for bosses that can’t be staggered.

The second big gimmick is something called “rallying.” The game encourages aggressive tactics within (a lot of) reason. Essentially, how it works is after getting hit, your health drops but you’re given a brief amount of time to regain whatever was lost by dealing damage to enemies. This leads to a bit of strategy as you try to determine whether you want to run away and pop a blood vial or hold your ground and deal back a little of what was taken away. Most of the time I ran away like a little baby because I ain’t gonna fight a wolf made out of human parts. Nu-uh. You get that out of my house, please and thank you.

Let me tell you about the bosses.

I hate them. All of them.

Actually, they’re mostly pretty creative and fun to fight against. If not rage inducing. I can’t tell you how much I was sweating after fighting Father Gascoigne for the first time. Every boss makes you work for the victory and the satisfaction you get from killing a two story pile of desecrated corpses isn’t really something I can put into words. It’s like bashing your face into a brick wall for two hours and then right before your brain is permanently damaged from all the skull fragments inside it, a single brick pops out and now you need to do that to 100 more individual bricks. There. That’s how I put it into words.

But the game is not without its problems. Aside from the obvious “oh, it’s too hard for me. 0/5” I got a big issue with the healing potions. You can only carry 20 blood vials at a time, which doesn’t seem that bad. And any blood vials you collect while at the maximum are sent to storage and are automatically replenished whenever you go back to the Hunter’s Dream or when you die (and let’s be honest here. It’s gonna be the latter more often than not.) But after you get a couple health upgrades, the blood vials become less and less effective as they never improve the amount of health you gain from using one and enemies will start taking large portions of your health without much provocation, so you’ll end up scarfing down two or three at a time and then you’ll run out and then you’ll die fighting your way back to the lantern so you can refill them and then you’ll respawn with like 3 and realize you’ve used all of your storage reserves so now you have to head to one of the earlier areas so you can farm for more and by now I could do the first two areas with a hand tied behind my back.

And that kinda leads to my second biggest issue. ALLA LOADZ!

To fast travel or level up or upgrade equipment or do literally anything that isn’t fighting things, you have to travel to the Hunter’s Dream. Which is admittedly a nice vacation spot, but that isn’t the point. If you want to get there you have to activate a lantern. Lanterns are few and far between and usually only open up after killing a boss. But once you use one, you’re sent into a loading screen. Now, loading screens have been shortened in a recent update but they’re still balls long. If you’re heading into Hunter’s Dream to fast travel you should think up a good excuse to do something because you’re going to spend at least two minutes sitting in loading screens. And dying also sends you into a loading screen, so if you want to farm up your blood vials after dying. That’s three loading screens for you, ding dong.

But once all’s said and done, it’s really about family and how special it is to have loved ones in your life. And really, that’s all we really need. A good, clean morals.

Srs tym doe. If you have a PS4 and want to play Bloodborne, you really should. It’s a fun and addicting game with a very dark and macabre atmosphere that does something to drag you in and almost forces you to keep fighting and experience the world without you even realizing you spent four straight hours playing it. It’s pretty much the best game I’ve played this year.