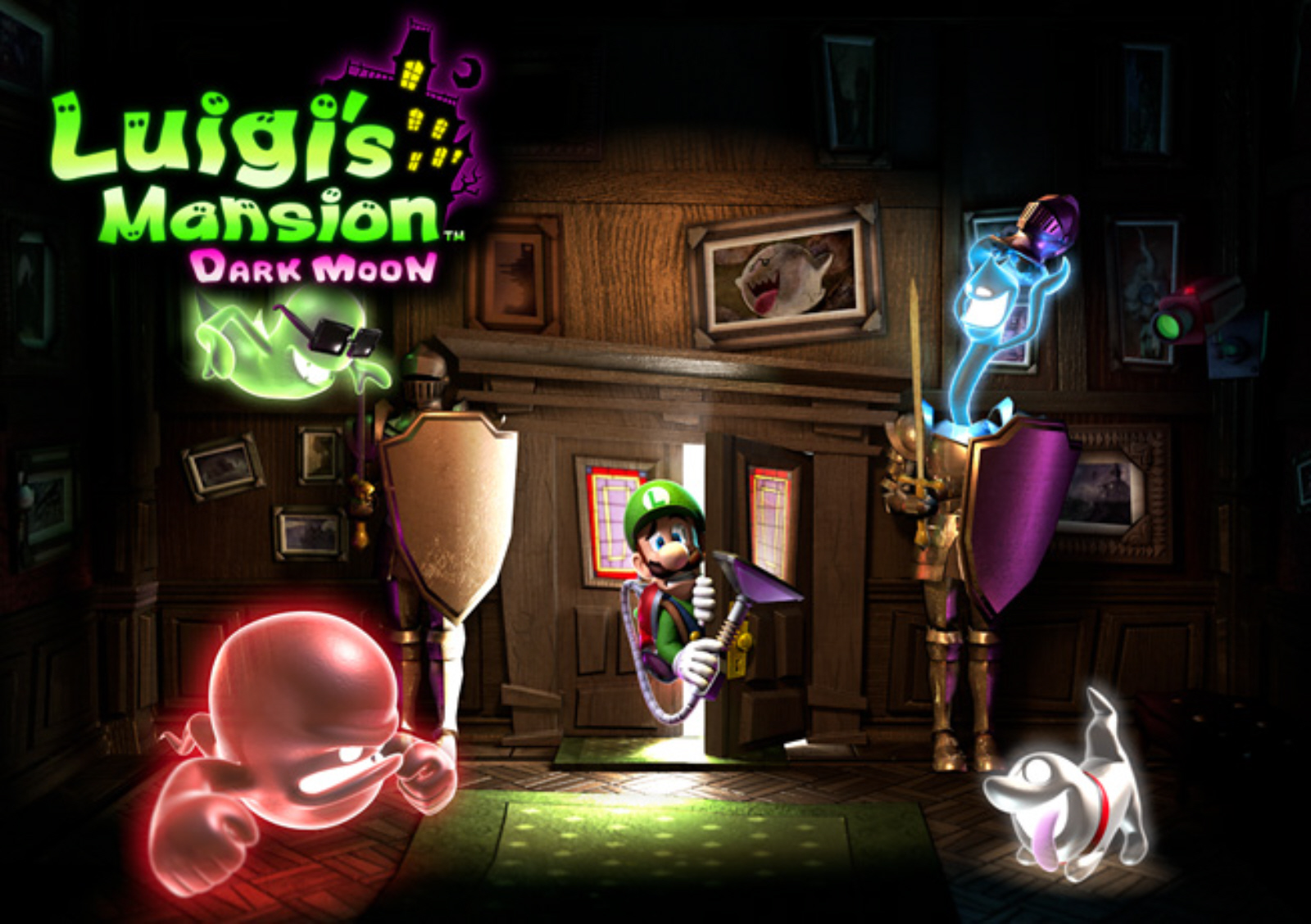 I’m running out of clever ways to start these things. So let’s use a traditional clumsy transition and get right into the thick of things. You know what’s thick? Luigi’s mustache. BOOM! Clumsy transition.

Because I’m talking about Luigi’s Mansion: Dark Moon. Technically it should be called Luigi’s Mansions: Dark Moon, because you go into multiple mansions. But I guess Nintendo’s keeping the branding the same to avoid confusing stupid people.

You know who is stupid? That ghost dog. He shows up in the story. (Nailed it.)

Once again Luigi is forced into ghost hunting by his old friend professor E. Gadd. Basically, there’s something that keeps the ghosts from becoming evil called the “Dark Moon” (I’m not the only one who can do clumsy transitions… Nintendo.) The Dark Moon is stolen by King Boo. It’s made pretty obvious that the king stole the Dark Moon because you can clearly see him throughout the game, it’s also pretty obvious that he trapped Mario in a painting, again. (I’m not spoiling anything, there’s literally a part in the first mansion where you see the painting covered by a tarp and E. Gadd says “That hat looks familiar.” So, only third graders would really be challenged by this mystery.) So if you were expecting a great and intriguing story, you can just smash that expectation early. I mean it’s Nintendo, remember the last time Nintendo tried to make an intriguing story? We got Other M. (Shudder) Basically. E. Gadd forces Luigi to suck up a bunch of ghosts using the new and improved Poltergust 5000, and yes it is new and improved. (There are some swanky new attachments.) That’s pretty much it. Also there’s this dog that shows up every mansion and steals something that you need to advance to the boss room so then you spend at least one mission chasing after him. So that kind of sucks.

You know what else sucks? The Poltergust 5000! (I am on fire today.) The Poltergust 5000 is just an improved model of the Poltergust 3000. (Don’t ask where the Poltergust 4000 went, because I’m still trying to figure that out myself.) The Poltergust 5000’s new thing is that instead of being able to turn the flashlight off, Luigi can just activate the strobe light which just makes the light flash real bright and stun ghosts. I can see why they did this. See, Luigi’s Mansion of the GameCube variety had a second analog stick, something the DS of the 3D lacks, so it’s easier to be able to shine your light on the ghosts than having to hold a button to turn it off and then turning it back on when a wild ghost appears. Also, you don’t have to wait for ghosts to become visible to flash your goods at them (Oh no. I’ve made a terrible error.) So it’s all G, Homie. Also there’s a Dark Light. (Yeesh, two flashlights and not a bright bulb in between them. (read that like your father would and the joke will make sense.)) The Dark Light allows you to find invisible things and Boos. (Oy, this Luigi is always trying to find Boos, he is bad influence.) It makes for interesting puzzle design. If you can’t make anything appear by shining the Dark Light around the room then you switch to using the Strobe Light and finally you just vacuum everything until something happens. (At least that’s what I did.) Here’s something else that happens.

That’s basically it. Luigi looks hilarious. When you walk around a room that’s cleared of ghosts he kind of has this smug stride to his step and when he starts running in a room filled with ghosts he’ll do a Scooby Doo style leg twirl before running away like a little school girl. And this game also made Toads slightly more bearable just due to how every time they help Luigi solve a puzzle he gives them a high-five and it’s super cute. (I AM ALLOWED TO LIKE CUTE THINGS!! ALRIGHT?!) You know what I don’t like?

I don’t like climbing over tightropes. (*fist pump* Hit my stride.)

Okay, who’s idea was this? Who looked at the 3DS and said, “Hey, you know what we need? Poorly implemented gyro-controls that are way too finicky yet somehow completely unresponsive.” And Shigeru Miyamoto’s just sitting in his office like “SHIP DAT OUTA TOWN, MAN! WE GOT DAH BEST IDEAS!” Yeah, it was kind like that. I mean. Yeah sure. You can use it to control the camera. You know what else controls a camera? A FRIGGIN SECOND ANALOG STICK! Ya retards. Okay, sure. You can use it to balance yourself while walking across tightropes. Umm… no, no you can’t. This is a broken game mechanic, I was literally seconds away from chucking my 3DS at a dolphin after my eleventh try and first game over at the first tightrope section. (You see Nintendo? Gyro-controls kill dolphins.) So, yes, I almost rage quit over something that could have been fixed just with some more planning. (And don’t tell me anything about turning off Gyro-controls. I was in such white-hot fury that I completely forgot that options were a thing.) You know what else is a thing?

Ratings are a thing. (I’m done with the poorly crafted transitions.)

So on a scale from [INSERT RANDOM THING THAT IS APPEALING TO ONE OF THE FIVE SENSES] to [INSERT OTHER RANDOM THING THAT IS LESS APPEALING TO THE SAME SENSE] Luigi’s Mansion: Dark Moon gets a [INSERT THING THAT IS PRETTY ATTRACTIVE TO THE SAME SENSE LISTED BEFORE, PREFERABLY LEMONS] Except for that gosh dang tightrope crap. That gets like a, prune or a piece of turd. You like that Nintendo? A little piece of turd? Just all up in your game? Obviously you do because you put it there.

So, yes. It’s a good game. It’s actually a great game. Just watch out for tightropes.